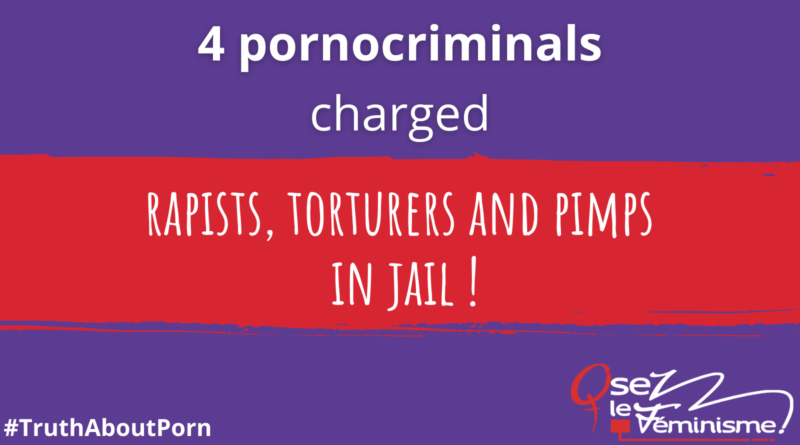 Four pornocriminals charged with « rape, aggravated pimping and aggravated human trade » : The beginning of the end of impunity within the misogynist, pedocriminal, lesbophobic and racist pornocriminal system

News is out in the newspaper 20 minutes that 4 pornocriminals, including Mathieu L. (aka Mat Hadix), and Pascal Aullitraut (aka Pascal OP) are being investigated for rape, aggravated pimping and aggravated human trafficking. Two of them are now in pre-trial detention, and the other two are under judicial review. Pascal Aullitraut is also being sued for « laundering of aggravated pimping and money laundering » as well as « concealed activity ».

This is happening only a month after the public prosecutor in Paris opened an investigation against “Jacquie et Michel » for aggravated pimping and rape, in relation to the complaints filed by Osez le féminisme !, Mouvement du Nid and Les Effrontées, three French feminist organisations.

Justice may finally be starting to listen to the countless victims of the pornographic industry and to condemn the violences that they endure.

In this new case, all the individuals are being indicted for the « Jacquie et Michel » company and/or for the Dorcel company, which are the two leaders of the French pornographic industry, with dozens – if not hundreds – millions of views to their count.

Mathieu L. aka Mat Hadix in particular is known as the « Godfather » in his field. Main producer of « Jacquie et Michel », he even represents the company in the media instead of Michel Piron, “ Jacquie et Michel” ‘s CEO.

We stand at a turning point in the fight to end violence against women and girls. These are not random cases, but rather the disclosure of a criminal system, built on the erotization of misogynist violences, pedocriminality, lesbophobia and racism. A system that earns money out of filmed rapes. Pornography is the concrete and institutionalised expression of women hatred and destruction.

Our society is dominated by the impunity of aggressors, with less than 1% of rapists convicted. In the pornographic industry this impunity is absolute, or at least it was until now.

Up until now, rapes, acts of torture and barbarism, statements that were glorifying pedocriminality and racial hatred remained unpunished on the grounds that it was « filmed sexuality ».

Up until now, pornocriminals were allowed to brag about the rapes and tortures they were guilty of with outrageous sadism, taking advantage of women’s suffering and glorifying themselves for it.

“Any violation of a woman’s body can become sex for men; this is the essential truth of pornography.”
Andrea Dworkin