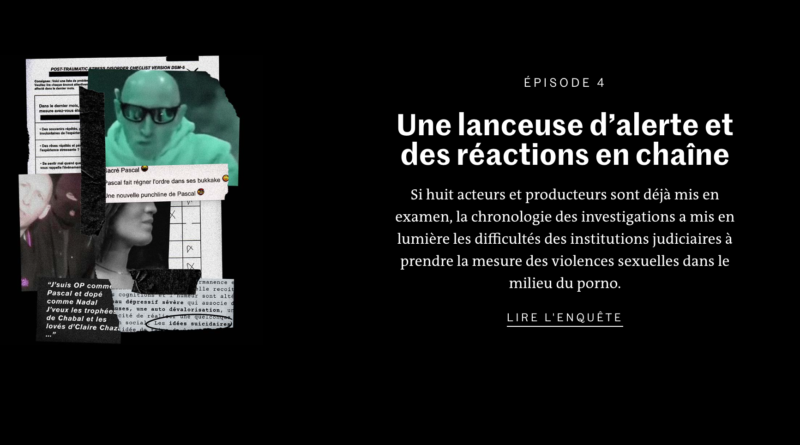 INVESTIGATION | “Lawsuits against French pornographic industry” (4/4) Le Monde devotes a series of articles to the far reaching  judicial investigations that are shaking the French pornographic industry to its core. This four-part investigation series highlights the difficulties that French institutions face in measuring the sexual violence committed within the industry.

With her long black hair and her eyes marked with eyeliner, Soraya (the victims’ names have been changed to preserve their anonymity) speaks calmly, chooses her words carefully, and exudes a presence, a sort of charisma. She defies the sexist image of the amateur, somewhat candid pornographic actress. This is fitting as she doesn’t consider herself as such, but rather as a victim of sexual violence committed by a criminal network. “Do you realise what you have done?” asks her friend, sitting at the terrace of a Parisian café. “There are 52 victims behind you” she adds. Soraya is a “whistleblower”, she is the first complainant in the case that is deeply unsettling the French porn industry.

The 53 victims examined in this case all testify to the state of psychological degradation into which they were thrown.  Some of them have thought of suicide. Most of them can no longer bear to have a man touch them. Others are unable to form a relationship. “I have given up on my life as a woman (…), I have given up on having a family life, which has always been my dream”, Hélène states simply.

Pornography stigmatises women and discredits their stories. In Reims, the hometown of the recruiter, Julien D., at least three women have filed complaints. One case is particularly interesting: Jennifer’s case. In February 2019, she filed a complaint against the forty-year-old, after having been raped, according to her, in a hotel. Julien D. was questioned at the police station for “rape”, “pimping” and “recourse to prostitution”. On 2 July, he was taken into police custody. The police wrote that Julien D. “admitted having used the pseudonym Axelle Vercoutre and having deceived at least ten women by making them come to a hotel in Reims in order to have sexual relations with them. He did not think he was committing any offences.” An officer called Jennifer and told her that the man had been arrested and that he would not do it again. “I got annoyed and he told me there was nothing more he could do, that the case was closed.” At the end of the proceedings, despite the incrimination of rape and the fact that the defendant himself had admitted to the facts, the public prosecutor decided to simply summon him to appear before the police court, which fined him 1,000 euros for recourse to prostitution. “Knowing that he continued to create victims afterwards revolts me”, Jennifer said.

When contacted by Le Monde, Matthieu Bourrette, the prosecutor of Reims, defended the decision of his public prosecutor’s department. In his opinion, there was no “surprise”, this is one of the four criteria for qualifying an act as rape – whereas promising sex in exchange for payment and then not paying can be considered as rape. “We therefore made the analysis that this man was using a stratagem to obtain sexual favours, not in a network context, nor by forced means, but alone, which explains the choice of the criminal qualification, and the orientation given to the case at the time.” The two other complaints were not found, the nine other victims were not sought and Julien D. continued to use the fake profile of Axelle Vercoutre.

It was not until the spring of 2020 that two Parisian policemen (gendarmes) took the case and that it finally came to light. On October 13, 2020, a first wave of arrests and searches allowed the seizure of French Bukkake’s rushes. To the point of nausea, the investigators viewed 135 hours of filming, documented the refusals of the women, the trampling of consent, the violence visible on the screen – all the elements that could qualify the rapes. It is no longer word against word, there is now filmed evidence.

The first arrests are causing panic in the French porn industry. While Pascal Ollitrault is incarcerated, his associate, Mat Hadix, is at first only subject to legal restrictions pending trial (French judicial control). He is not a seasoned offender. He does not consider that his telephone line could be tapped and he opens up to those close to him. First of all, about his anger: the producers for whom he works have cut ties with him. He is furious to learn that Dorcel, the giant of the sector, his main client, has deleted « 650,000 euros of videos, all [his] films from all platforms ».

At the end of 2020, facing the media storm, Dorcel as well as Jacquie et Michel, the famous French pornographic website for which the producer also worked, launched communication campaigns and published ethical charters to clean up the sector. The one for Dorcel was drawn up by a lawyer, a sociologist and the actress Liza del Sierra. « Dorcel is the leader of a porn industry that obviously condemns without reservation any criminal practice and does not recognize itself in it, » says the head of communications to Le Monde. Better information for actresses, the obligation to wear a condom or the presence of a « trusted third party » responsible for ensuring the well-being of everyone on the set are recommended. At Jacquie et Michel, which did not respond to our requests, surprise inspections are promised.

In the autumn of 2021, the gendarmes attacked the second circle of the network, the one with the four favourite actors of producers, whom they arrested for « gang rape ». Being a porn actor is not very lucrative, at most 150 euros per shooting, so they all have official jobs: Joël D., 46, is a fashion photographer; Franck M., 48, a civil servant; Moussa S., 44, an educator; Antoine G., 28, a plumber. At the end of October, in the course of a long maieutic process carried out by the investigators of Paris research section, they seemed to understand little by little the serious sexual violence in which they had participated. Always the same questions, in the same order, and especially the shootings’ viewing. After thirty seconds of a sequence that lasts three times as long, Joël D., disgusted, asks to be cut. « Did it seem interminable to you? » asks the investigator. « I imagine that if somebody did that to my wife, I would kill him fifteen times« , he gets carried away.

If they start by minimising the facts, the actors often end up breaking down. « Is it rape? » the policewoman asks Joël D. « Yes, madam. (…) It’s disgusting. It’s unspeakable. Pascal asked us to be harder and harder, not to make videos for chicks« . He then understands the heart of the case. « I would say that in relation to the definition of rape, it is rape disguised under the pretext of videos. » Confronted with a scene where he presses on the head of a woman, who almost vomits during a blowjob, he responds, « I deserve death… I don’t know what to say anymore, it’s carnage. » In tears in front of the victim’s images, « a normal girl who had never made a movie in her life, » he notes that she « was no longer there, she was lost. Only her body was present« .

At the end of their custody, the four actors were indicted, as was the rest of the network, which is languishing in prison. In detention, Julien D., the recruiter from Reims, keeps himself busy by writing letters. Pages and pages, in which he apologises to his wife and family and struggles to understand why he is there. « So yes, I conned, I caused deception, I hurt, morally, but no, I didn’t rape. (…) The police told my wife that I was some kind of manipulative, rapist, perverted monster. (…) I am mixed up with despicable people, rapists, pedophiles, I have nothing to do here« , he insists. His wife ended up asking for a divorce.