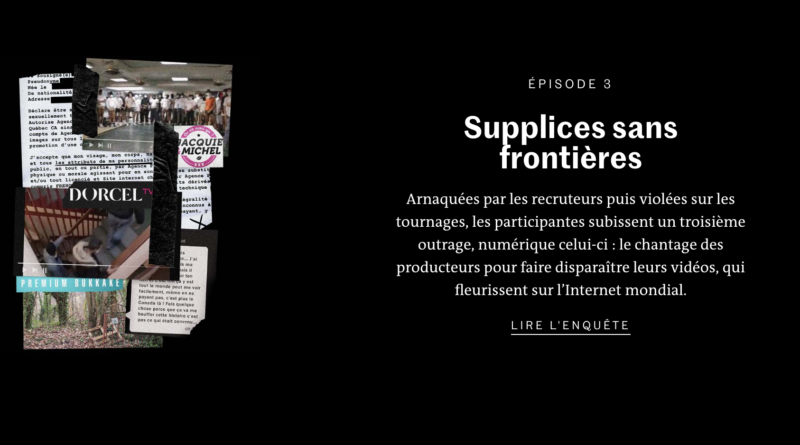 INVESTIGATION | “Lawsuits against French pornographic industry” (3/4) The large-scale judicial investigation into the activities of French producers and actors shows how, under the guise of amateurism, companies profit on the backs of their subcontractors and, ultimately, on the backs of the women recruited for the shootings.

The theory and the practice

In addition to the “professional” productions, Marc Dorcel is the main producer of such productions in France, there are so-called “amateur” shootings. Initially, these amateur shootings were videos of couples and libertines being filmed for pleasure. Nowadays, the Jacquie et Michel site is the leader of this sector, which sells itself on the fantasy of the wild “neighbor”, of “nice” porn, “available to all.” At least in theory, because this script does not correspond to reality; Jacquie et Michel is a very successful company with a huge turnover. This SME, which sells its videos individually or by subscription, quickly became a huge success. With hundreds of thousands of customers, a turnover of 25 million euros in 2017, and an iconic slogan that has become a household name: “Who do we thank? Thank you Jacqui et Michel!”

On a tapped telephone, Mat Hadix, speaks with his friend Adrien,  whose name has been changed for this article. Hadix condemns the hypocrisy of Jacquie et Michel’s boss, who, according to him, protects himself behind his role as a broadcaster and claims to want to put in place a charter of good practice. “Michel will end up in police custody, rest assured. Don’t think that this won’t go over his head. And then, he can’t hide, he can’t hide forever, can he?”

In another conversation, this time with his father, Mat Hadix claims to have threatened Michel P. in saying that he would tell everything he knew to a journalist in order to get money: “He said to me: ‘Oh no, but don’t take it like that’. I told him: “But you know what, not too long ago I made you more than a million, and not long after that you were breaking my balls for 2,000 bucks.” In parallel to the French Bukakke case, a preliminary investigation was opened by the Paris public prosecutor’s office against Jacquie et Michel for similar facts, and was referred to the first district of the Paris judicial police. When contacted, the company did not respond to Le Monde‘s numerous questions.

Krystofer Lorens also demands systematic screening on film shoots. “Pascal OP” deems this to be too complicated, thus he asks Vincent to make software that produces forged tests for sexually transmitted diseases (STDs). “I am aware that this is immoral and it is also dangerous for the health of  the actresses”, the optician admits to the police. Several women end up in hospital, being infected with STDs. Vincent, who is not at all careful, allows the men he recruits as security to participate in the bukkake sessions. He is only paid €300 once every two days. But like the producers, and the “actors”, his motive is above all sexual.

Vincent is afraid of Krystofer Lorens, who has threatened to come to his home if Vincent does not follow his instructions to a tee. Despite “Pascal OP’s” manly persona, he too seems to be afraid of “the Russian”. In his text messages, he refers to the “Russian mafia”. This international lead has not yet been explored by the French police, who are already overwhelmed by the scale of their national case. Behind Premium Bukkake, we find some Czech companies with vague names: European Top Project SRO, managed by Krystofer Lorens, but also Van der Kisok SRO, which is run by Enriko Lorens. The mysterious Lorens family run numerous companies, whose directors change regularly. When contacted by Le Monde, Krystofer Lorens explained that his company “adheres to the high standards of the market and meets all the statutory requirements” of the sector. Vincent’s lawyer did not wish to respond.

Likewise in France, the structure of Pascal Ollitrault’s company is also similar to the aforementioned shady criminal networks. His site is officially  under ownership of a Quebec company, Pinkdev, which is managed by one of his friends who lives in Canada. “Pascal OP” has also set up companies in Delaware (USA) and in Malta. As he is regularly banned from banking, he sometimes transfers funds via his son’s accounts. In spite of this global presence, the police are having difficulty in identifying large financial flows. His site generated €240,000 between 2015 and 2020. Did the sixty-year-old arrange his own bankruptcy? Bailiffs regularly knock on his house door in Eure.

“Pascal OP” and his associates found another way to recover their costs, again at the expense of their victims. Raped in hotel rooms in Reims, on film sets, then they return home completely traumatised, these women will now suffer the third violation, a digital violation. The videos, which were supposedly confidential, first land on the French Bukkake or Dorcel Vision websites, then are snapped up by all the online distribution platforms. Dorcel claims that it was “not aware of any suspicions of such practices” and withdrew all of Mat Hadix’s production as soon as the case was mediatised. But most of the images are still freely available on dozens of sites.

The moment the videos are published, the scenes circulate at a lightning speed, indicating the popularity of this type of humiliating footage. Soraya – the victims name have been changed – had the experience of a man recognising her and then following her to ask her to have sex with him. She had to move from her neighbourhood. Men on Héloïse’s local town’s football team ask her to prostitute herself. She later had to leave her job, as one of her videos was seen by her colleagues. Georgia also had to quit her job as a receptionist at a bank as she started receiving suggestive emails from her clients. All of these women are harassed, faced with dozens of insulting messages, and photos of male genitals…

Internet servers on the other side of the world

These women then turned to “Pascal OP” : “Please, I beg you, can you delete these videos, it’s pure hell and harassment for me and my family”, wrote Jade in March 2020. The producer makes her wait, and then writes “The video is deactivated… temporarily.” Jade is astonished, she asks “What do you mean?” He demands €2,500 to delete the two videos, a sum far greater than what she received for shooting those videos, and also money that Jade does not have. The producer replies: “Find a solution.”

Marianne also sends him a text message begging him to delete the images, which have already caused her relationship with her partner to break down. This young woman defeatedly admits, “I will surely lose custody of my child”. The producer replies, “Don’t forget to transfer me the money”. She also has to pay €2,500 so that the videos will be deleted from the French Bukkake website, however the videos remain on platforms that are on servers on the other side of the world. These videos have become impossible to delete. Soraya describes a scene in “Pascal OP’s” car in front of a fast-food restaurant: “He told me that I would have to pay €3,500 to have the videos deleted. I told him that this was more money than I earned for these videos. That’s when he offered me to be at his mercy,  for an indefinite period of time, to please him whenever he wanted.” She refused.

Max Hadix employs the same extortion process. In a conversation with Karine, who also demands the removal of her videos, he warns her: “The videos won’t be removed without paying.” Sometimes, the producer even acts as a middle man on behalf of Jacquie et Michel. In an exchange of text messages in 2017, he demands €4,000 from a woman who wants her videos removed from this platform. When questioned by Le Monde, the lawyers representing “Pascal OP” and Mat Hadix did not respond.

This is the final stage of the process. The young women, who accepted the film shoots to earn a little money, go into debt to buy back their videos and they in turn make “Pascal OP” and his network a little richer. This extra money covers the cost of their film shoots. Total humiliation for the victims : they are in fact financing their own filmed torture.