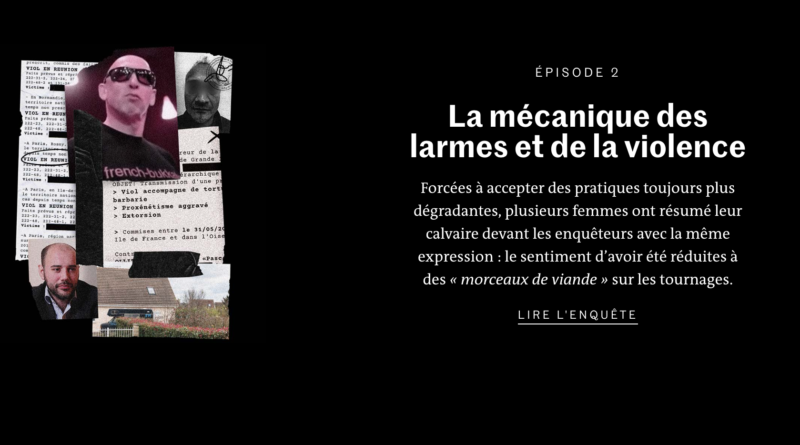 INVESTIGATION | “Lawsuits against French pornographic industry” (2/4) Judicial investigations of an unprecedented scale, to which “Le Monde” devotes a series of articles, uncover the methods used by key players in the pornographic world to force their victims to accept utterly degrading practices.

When they searched his house on October 13, 2020, the Parisian research section investigators had already been watching and monitoring Pascal Ollitrault, and other men, for months as part of a judicial investigation into charges of “gang rape », « aggravated human trafficking », « aggravated pimping », « money laundering », « undeclared work » and  » dissemination of the recording of images relating to the commission of a wilful attack on the integrity of the person”.

A dive into this huge legal case helps us understand the inner workings of a mechanism that serves the largest porn distributors in France, who are determined to satisfy, at any cost, the millions of consumers of their videos, which are “amateur” only in name and technical quality. For months, the police traveled the length and breadth of the country to question the victims. Although each story is unique, the fifty or so testimonies on record reveal a polyphonic narrative of a system which violates the victim’s consent three times: firstly, at the time of recruitment, secondly, during the filming,  and finally, with the diffusion of the videos.

The violence of the traumas has fragmented the victim’s memories. Imane – the first names of the victims have been changed -, a 22-year-old woman from Marseille, confides that she only has « flashbacks » of her three days in hell. In the summer of 2015, she had just lost her partner and « no longer had the will to live”. Her fragile state was exploited by the « recruiter », Julien D., under the female pseudonym of Axelle Vercoutre. In order to gain her trust, Axelle sent her messages on social networks for weeks, even months.

The torture lasted for hours

Young women, often with great financial difficulties, are lured by promises of high returns, up to 2,000 euros. « Pascal OP” fails to mention that in reality his fee is around the 250 euros mark for a single scene. But for the time being, in front of Imane, he shows a friendly face. He makes her do a video where she says she consents and has not consumed alcohol or drugs. Soon she is in a Parisian flat with her first partner. Then she shoots other scenes, with two men. A sodomy, which she initially refused before giving in. « Compared to what happened next, it was clean », she told the investigators.

« Pascal OP » drove her to Andelys. « There, he started talking really poorly to me”. The producer takes her to a room on the pretext of making a video, but the camera is not running: he sexually coerced her. The following morning, « Pascal OP » refuses to pay her. She has to do the dishes. Imane’s memories are scattered: a scene shot in the car on the way to Paris, another on arrival in an apartment, « a rented one, where there is not a lot of things », except for three men, whom she is not introduced to. « I was in pain, I told them that, but they didn’t give a damn. Then, they did everything to me, several at the same time, double penetration, sodomy, etc. » In pain, she tried to protest. « I got slightly angry, but they forced me, they pressed my head against the floor and they continued.”

More flashbacks come back to her. The producer is angry, threatening to kill her, to hand her over to his dogs. Then, just as she thinks she can finally go back to Marseille, he forces her to shoot one last clip, the highpoint of his films, the bukkake, the practice of having a dozen men ejaculate on the same woman. “It was a warehouse, in an old, abandoned car junkyard. Inside, about forty hooded individuals were waiting.” He said to me: “They’re guys from the hood, they’re here to hurt you, to make you dirty.” Imane is terrified. “It’s a nightmare. I have to get down on my knees, touch everyone, let them do it to me.” The torture lasted for hours. The producer wants to keep her longer, but a man finally takes her out of the warehouse. She will never be paid.

The trampling of consent

“I dispute all the facts, she was paid, she signed all the contracts,” replied “Pascal OP” to the investigating judge. “I remember she had a smile on her face in the video, it went well.” This was more or less his answer when confronted with the very similar accounts of the 52 other victims. Filmed in holiday rentals, squats, hotels, forests or camper vans, the productions are ultra-low cost. Several women have shared the same sentiment: the feeling of having been reduced to “pieces of meat”.

Pascal Ollitrault and his associates hide behind the same defense: Why, then, did they not leave the film set? Their state of total shock, no doubt. “There’s this pressure (…) all these men in a room, we’re the only girl”, analyses Héloïse.  Above all, the producer’s character scared them. There are also the suspicions of chemical submission. Samira, the latest victim, had her hair analyzed, and the results showed traces of zolpidem, a hypnotic. “Pascal OP” denies having administered any substance to anyone.

On the other hand, many of the women talk about drugs. According to them, the producer made them consume both alcohol and cocaine, and that he himself is a heavy user of cocaine. This is a claim which he denies. Maud recalls that he told her “If you don’t drink all your glass, we won’t shoot the film”. “I realized that I was going to have one of the worst times of my life.”, added Héloïse “When Pascal, at 8 o’clock in the morning, told me to drink and take drugs, well, I just do it”.

This violence can be seen through the images. In French Bukkake’s videos, tears and pain fuel the script of the ingenue who suffers male domination. The trampling of women’s consent, an old time favourite storyline of “Pascal OP”, is reflected in his obsession with forced anal penetration, even off-camera as Jeanne recounts: “He made me understand that I had no choice. I let it happen because I was exhausted.” Young women are also not protected against STDs. “They all penetrated me without a condom,” recalls Cécile. “Pascal OP” urges her to smile despite the pain. Before the judges, he denied any sexual misconduct and tried to downplay the “average visibility” of his site. However, when he was interviewed by Charlie Hebdo in 2017, he proudly spoke of his 200,000 monthly visitors.

The third man, the associate

In his shadow, another man is busy at work : Mat Hadix is his stage name, a 38 year old, with a shaved head and some stubble. After the recruiter (Julien D., under the false profile of Axelle Vercoutre) and the producer (“Pascal OP”), this is the third character in this organized gang: the associate. His role: to provide the cameras, rent the apartments.  In exchange, “Pascal OP”  shares the “raw material” (the women), trapped by Julien D, with him. When a girl she’s making one video, she is actually shooting several scenes for various productions.

When contacted by Le Monde, the firm that manages Jacquie et Michel did not reply. Our journalists met the same fate with Union. Dorcel denies any responsibility. “We were obviously not aware of any allegations of such practices and we have not, to date, received any reports of any kind regarding the productions we have broadcast,” declares the head of communications for the company, who specifies that she only worked with Mat Hadix, and not with “Pascal OP”, whose videos they considered “extreme and degrading”. However, a documentary of “Dorcel TV” in 2012 shows a bukkake film shoot. The company maintains that it was “investigative journalism” that “raises the alarm on the extreme nature” of these productions. This is doubtful, given the text at the beginning of the video, announcing content that’s  “funny, provocative, sickening … and to be taken with a pinch of salt.”

The relationship between Mat Hadix and “Pascal OP  », who share their film shootings, is at the heart of this case, revealed by Le Parisien. Mat holds the camera when Pascal decides to enter the running scene, without warning the women. The former always has some cash on him when the latter is short of money ; he’s also there to pick up the pieces when he’s too rough with the girls. Mat Hadix directs classic scenes when “Pascal OP  » builds his reputation on violence. The good and the bad? The investigators seem to think that the two of them played the role of the thug in equal measure.

Confronted with an avalanche of testimonies and embarrassing exchanges with Julien D., Mat Hadix sketches a mea culpa : “I begin to understand that it wasn’t appropriate that women came on set without knowing what would happen during filming, the number of men, or the practices.” He denies the rape accusations. However, the testimonies pin this on him “ Mat forced. He stayed behind and insisted” says Clara, who said no several times. When contacted by Le Monde, the lawyer of Mat Hadix did not wish to comment at this point. Pascal Ollitrault’s lawyer did not respond. “Porn has never been associated with rape. In this legal case, there is such badness in building these ploys, such an attack on women, I am sickened” said Mr Quentin Dekimpe, lawyer representing a complainant

Sometimes the victims try to rebel. When this occurs the two producers reintroduce the virtual best friend: Axelle. On the second day of shooting, Karine flees into the toilets. “Pascal OP” threatens to throw her out without her things and to release her videos. Via text messages, Axelle convinces her to continue the shooting at all costs. After around two or three days, and dozens of non-consensual penetrations, the light finally comes back on. The victims, exhausted and dispossessed, are let go without the slightest consideration. Before leaving, they are paid in cash, often less than the agreed sum, in exchange for their signature. They sign their name not for a work contract, but to authorize the distribution of the videos in Canada. Karine recalls “Pascal takes me back to the train station. He almost threw me out of the car.” Heloise is dropped off in an empty train station, after a bukkake. A participant stole her coat.