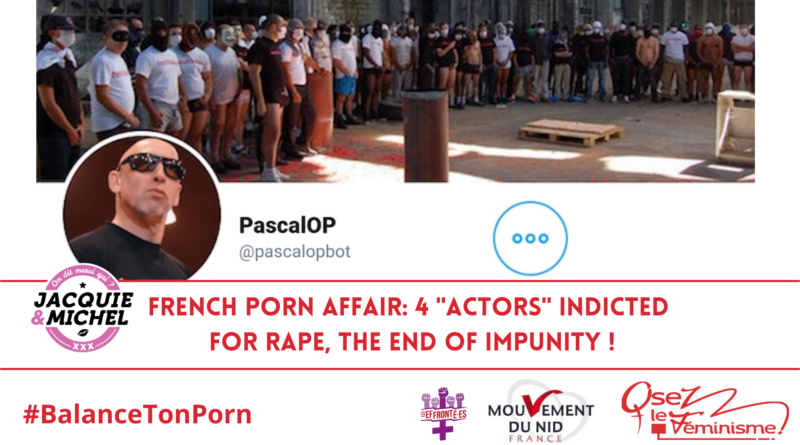 After the indictment of two producers (including one, Matthieu Lauret, who is one of the main French suppliers of films for Dorcel and Jacques et Michel) in October 2020 for aggravated rape, pimping and human trafficking. These indictments are a fundamental step towards the end of impunity for the entire pornocriminal industry.

We salute the strength of the victims of pornocriminal violence, whose courageous speech will contribute to the destruction of this lawless area.

This October 28, 2021, we learned the indictment for rape of four « actors », including « Tonio Love » and « Eddy Blackone ». This follows the indictment of two producers of Jacquie et Michel and Dorcel in October 2020 and two of their accomplices. One of them was in charge of grooming and trapping women to supply this industry of violence with « actresses ».

These are only the beginnings of a historic case for which more than 50 victims have already been identified.

It is the whole organization of a pornocriminal industry that is exposed: a vast network of pimping and human trafficking, subjecting women to prostitution, rape and torture.

The « actors » defend themselves by invoking that a contract was signed as proof of « consent ». Justice will remind them of the law: consent cannot be bought with a contract; any sexual act committed by coercion, violence, threat or surprise constitutes the crime of rape.

This case reveals the structural violence of the pornocriminal industry, which is nothing less than a vast pimping system.

The proposal for a « charter » presented by several producers of the pornocriminal industry, since the revelation of this case, is not fooling anyone. It is an insult to intelligence, in view of the criminal acts committed on these « shoots ». This charter is the dishonest response of an industry that knows it is illegal. It is justice for the victims that we demand!

Since our first report to the courts in February 2020, our feminist associations, Les effronté-es, Mouvement du Nid, and Osez le Féminisme! have been on the side of the victims of pornocriminality, and will fight to end the impunity of the pornocriminal industry.

Pornography is the height of misogynistic violence against women and girls. According to researcher Gail Dines, 88% of videos contain scenes of sexual violence, feeding the worst of rape culture. As a tool of patriarchal propaganda, pornography feeds misogynistic hatred against women and girls. Harbours the worst sexist, lesbophobic, racist archetypes, and is the display of a pedocriminal ideology. There can be no fight against male violence without including the fight alongside the victims of the pornocriminal system. Our society defends equality and reciprocity of desire, the pornocriminal system has no place in it.